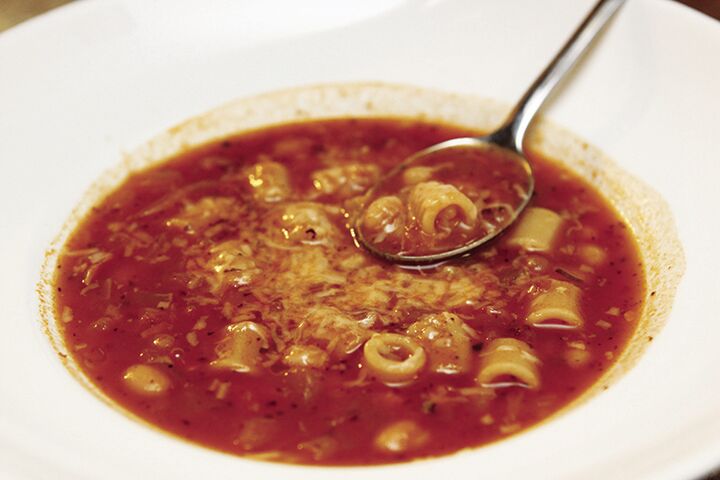 Editor’s note: This column originally ran in the March 23, 2012 issue of the Banner.

My little man Jack’s favorite food is soup (except when it’s cupcakes), and we typically make at least one pot of soup each week. When Jack received a toy kitchen for his second birthday, soup was the only dish that he knew how to pretend to cook (aside from cupcakes).

“Jack, what do you need for your soup?”

“So close, little dude. So close. Go feed your soup to Uncle Cory.”

Soups with pasta and beans are tops in Jack’s book, and we created this light and flavorful soup a few weeks ago. The soup gets a lot of flavor from a lot of sautéing, as you’ll notice in the steps. Add ingredient, sauté. Add ingredient, sauté. “Layers of flavor” is a commonly used phrase on cooking shows these days, and that’s exactly what you’re creating here – each ingredient cooks separately and releases its own flavor to the pot.

This process starts with sautéing pancetta. Pancetta is sort of like bacon, except it’s not smoked. You can easily substitute bacon, although it might be a bit chewier in the soup. You can also substitute chopped ham, or even a half-pound of ground beef or Italian sausage, to make the soup heartier. (You could also omit the meat entirely, but … does … not … compute …)

A small pasta is preferable in this soup. Ditalini is pretty easy to find, but Jack recommends the slightly larger mezzi tubetti. He also recommends wearing a piece of cooked mezzi tubetti on each of your fingers while you eat.

And I recommend serving this soup with a swirl of olive oil and freshly grated Parmesan cheese at the end, because they really does give the soup extra taste and richness.

We both insist that you serve the soup with hot, garlicky breadsticks.